Trending
How to Manually Install Skyrim Mods - Guide For Mods Victoria’s Secret 2019 Fashion Show Officially Canceled  TOKEN2049 is Back for 2020, Examining What’s Next for the Crypto Industry How to Boost Your Affiliate Commissions Overnight How iOS 13's dark mode can make your life easy
Cryptocurrency

$10 Million Raised for Onomy Protocol on Brink of Launch

The world of traditional and decentralised finance continues to converge, with large financial institutions continually exploring further DeFi integration, and VCs doubling down on web3 investments in the space.

Despite the current squalls in the general market, large investors and companies remain undeterred when it comes backing upcoming protocols that will serve to change the way finance is done forever.

This is clearly the case for the upcoming launch of Onomy Protocol, who just announced a $10 million raise ahead of the protocol going live. 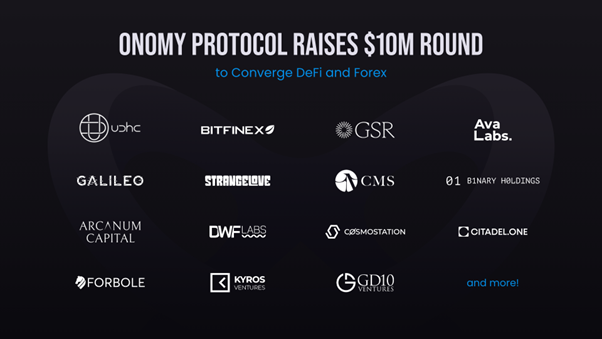 The $10 million raise indicates enormous excitement about the change Onomy is planning to bring to the space. The raise announcement follows extensive coverage of Onomy’s partnership announcements with some of the biggest players in DeFi, including Avalanche, IOTA, Polygon, and Near – with whom they have custom bridges which help power the protocol.

What is Onomy Protocol?

Onomy is a fintech shell for DeFi built on Cosmos. It will abstract away complexities like cross-chain asset migration, governance voting, liquidity provision, and – of course – trading, in one simple app.

All assets can be held non-custodially (i.e, the user holds the keys) in the Onomy Access wallet, and assets can flow through the Cosmos Interchain and across Onomy’s partner bridges directly from the wallet. A user – from retail individual to giant institution – can interact with DeFi through a UX that feels like any banking or exchange app.

This includes trading. Onomy has created a hybrid DEX that looks and feels like a CEX. It has an orderbook, trading UX, and limit and market orders. However, it is actually an automated marker maker akin to Uniswap. Unlike Uniswap, it doesn’t charge static fees. Instead, it captures the spread between the bid and the ask, and uses those fees to pay LPs. It is the next evolution in DeFi, and Onomy’s storied backers seem to agree.

TradFi and DeFi to Finally Converge

Onomy is set to launch soon and it’s recently completed testnet was a roaring success with over 800K transactions and a whopping 40k unique users. The success bodes well for the launch, with the token to be released for sale through a radical, and radically fairer, Bonding Curve Offering. TradFi and DeFi continue to converge, and with Onomy Protocol, the river may join and bear us ceaselessly into the future.

The post $10 Million Raised for Onomy Protocol on Brink of Launch appeared first on Blockonomi.

By Matthew Velter
Binance has admitted not keeping customers’ funds and the platform’s separate, according to…
END_OF_DOCUMENT_TOKEN_TO_BE_REPLACED
0
0
Share
Cryptocurrency