Trending
How to Boost Your Affiliate Commissions Overnight How iOS 13's dark mode can make your life easy How to Manually Install Skyrim Mods - Guide For Mods Victoria’s Secret 2019 Fashion Show Officially Canceled  TOKEN2049 is Back for 2020, Examining What’s Next for the Crypto Industry
Technology

With the downfall of FTX, which was once one of the most popular and highly reputed exchanges, a domino effect has taken place in the crypto industry. Prices of tokens are falling, people are losing trust in the asset class and a lot of rumours of potential bankruptcies of companies are spreading like wildfire. And very recently Genesis was also caught in one such rumour.

Genesis is a digital brokerage site that aims to connect investors and digital assets. It allows you to trade, borrow, hedge and do a lot more. The first OTC bitcoin trading desk was launched by them in 2013 and is a very prominent digital finance firm.

What happened to Genesis?

After what occurred with FTX, the exchange collapsed severely and a huge wave of terror and rumours spread. This had collateral damage on various other firms, with Genesis being one of them. After the crumbling of FTX, Genesis on 11 November 2022 came out saying that $175 million was locked in an FTX trading account.

Post this the firm has been looking to raise a fresh capital of almost a billion dollars. There were rumours circulating the probably Binance, headed by CEO CZ, would end up investing, however, no such deal has taken place yet due to an “alleged conflict of interest”

What does this mean for Genesis?

With the current situation that was brewing, many people were led to believe that Genesis is at a risk of bankruptcy. There are reports of Genesis facing a lot of difficulty in meeting the funding requirements for the lending unit. If the firm fails to meet the capital is looking to raise, it could prove catastrophic for them.

Read more about the other collateral issues caused by FTX crumbling: Will Solana Recover after FTX collapse?

What was the response of Genesis?

As of right now, Genesis and its representatives have refused to claim any such rumour as true. On 16th November 2022, Genesis did announce that they would be temporarily suspending withdrawals due to “unprecedented market turmoil”. 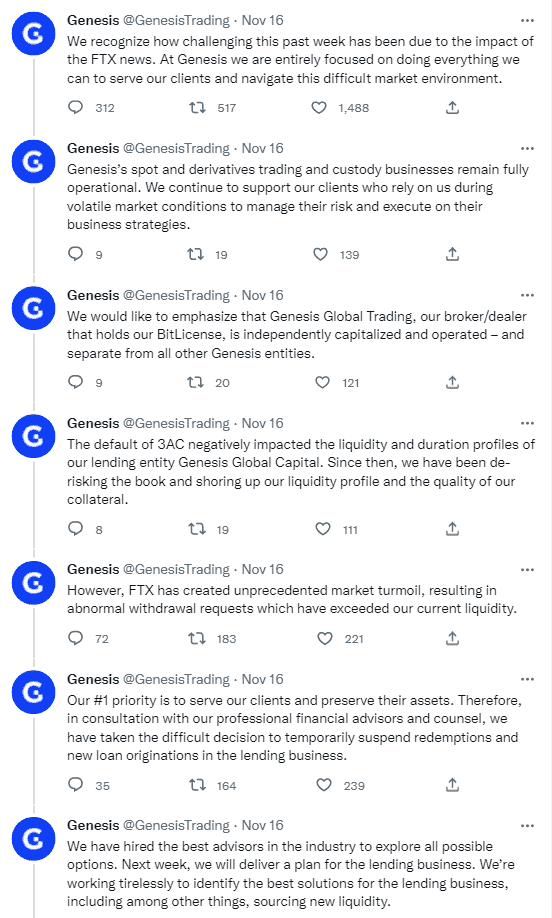 Very recently this is what a Genesis spokesperson had to tell the masses; “We have no plans to file bankruptcy imminently,” a representative for Genesis said in an emailed statement. “Our goal is to resolve the current situation consensually without the need for any bankruptcy filing. Genesis continues to have constructive conversations with creditors.”

What are the latest developments?

On 22 November 2022, Frank Chaparro, Editor-at-large at The Block, took to Twitter and said that certain sources have revealed that Genesis has cut down its funding targets from one billion dollars to half a billion dollars now as they face the risk of bankruptcy.

In the myriad of plausible rumours, another prominent one according to the report by Bloomberg was that the firm has reached out to Apollo Global Management for their funding need however a deal is unlikely to materialize. However, these claims haven’t yet been confirmed by Genesis or any of their spokespersons.

The ripple effects of the recent happenings that have occurred in the last month can be seen prominently now. Not just Genisis but even firms like Gemini are facing risks because of what’s happened. A great negative sentiment has built up in the crypto space and all users, investors and traders have very little hope regarding the current situations. 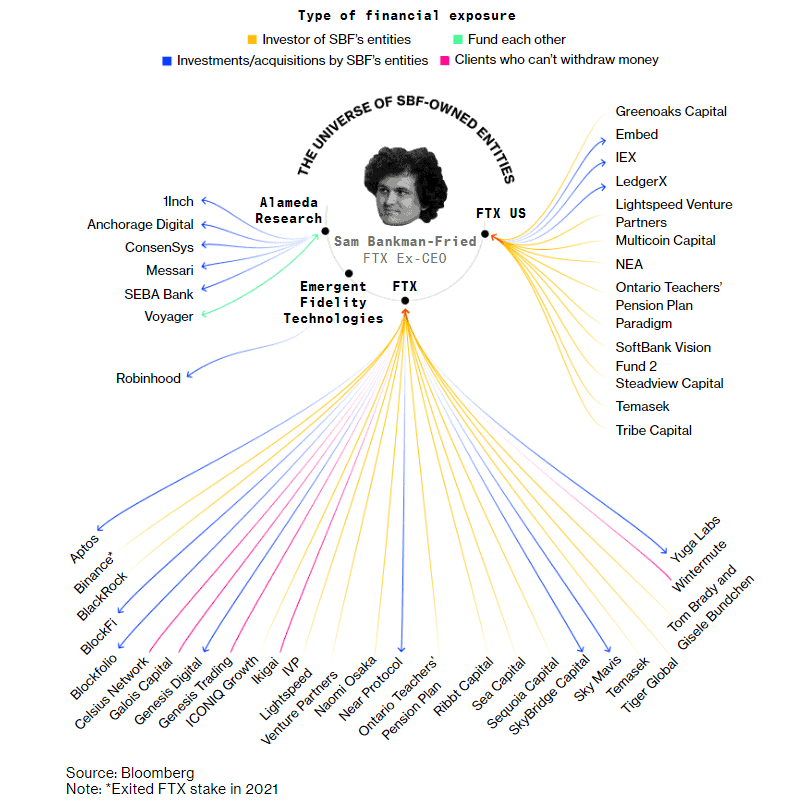 Read more about what happened with FTX here: Crypto Crash November 2022 &#038; the collapse of FTX Empire: What caused it?

By Brynne Conroy
Released in 2016, MetaMask with over 30 million users globally, has in no time become one of the…
END_OF_DOCUMENT_TOKEN_TO_BE_REPLACED
0
0
Share
Technology

Hooked Protocol (HOOK) to be launched on Binance Launchpad

By Brynne Conroy
Binance on 23rd of November, 2022 announced its 29th project on the Binance Launchpad – Hooked…
END_OF_DOCUMENT_TOKEN_TO_BE_REPLACED
0
0
Share
Technology

Is Crypto.com Safe? Should You Withdraw Your Funds from The Exchange?

By Brynne Conroy
Crypto.com users are confused whether they should be holding their funds on the exchange, and earn…
END_OF_DOCUMENT_TOKEN_TO_BE_REPLACED
0
0
Share