Trending
TOKEN2049 is Back for 2020, Examining What’s Next for the Crypto Industry How to Boost Your Affiliate Commissions Overnight How iOS 13's dark mode can make your life easy How to Manually Install Skyrim Mods - Guide For Mods Victoria’s Secret 2019 Fashion Show Officially Canceled
Entertainment

The story of Ryan Beckett and Zach Ninfo is reminiscent of the 2008 comedy Step Brothers, which starred Will Ferrel and John C. Reily. The film follows the story of Brennan (Ferrel) and Dale (Reily), two adults who were forced to live together as stepbrothers. They initially hated each other but soon developed a brotherly friendship because of shared interests.

Beckett and Ninfo were much younger than the movie’s characters when they met and became stepbrothers (they were eight). But like Brennan and Dale, the two also disliked each other first. That is, until, they grew passionate about the same thing when they became teenagers: music – classic rock, and the music of The Beatles, in particular.

And now the two comprise one-half of the rock/pop band Milou Sky. Beckett is the band’s singer, songwriter, and lead guitarist while Ninfo plays drums. The other members of the band are Liam Meadowcroft who also sings and plays rhythm guitar and his brother Nolan Meadowcroft who plays bass.

From basements to festivals

Beckett and Ninfo met Liam in school back in their hometown of Reading, Pennsylvania. Their initial suspicion of Liam turned into respect and appreciation when they learned that he’s into Nirvana, Oasis, and Arctic Monkeys. After countless basement jam sessions, the trio finally decided to form a band called The Reasons.

The band started to play in various music festivals in Reading such as the West Reading Fall Fest and Reading Fire and Ice Fest, playing original songs about the joys and pains of everyday existence. They have also guested in local television shows.

“We’re always writing and the result is a competitive balance between everyone in the band,” Beckett says.“We enjoy being together and playing music together. We’re inspired by music we like, and we feed off of what we hear to create our own songs and sound.”

Nolan was a late addition to the band. Being a quick learner, he joined just a year after he learned how to play bass guitar. He was originally a drummer in his middle school band.

In 2018, the band met Grammy award-winning producer Robert Cutarella in New York City and immediately hit the studio. Cutarella previously worked with famous artists such as Eric Clapton, The Police, and Keith Richards.

Two years after, the band’s debut EP Compromise was released. “The EP showcases the collection of styles that we mashed together to create our sound,” Beckett says. “These songs are meaningful to us because we can share what we feel with our audience.”

In May of 2020, the band changed their name to Milou Sky, named after a character that Beckett was going to play for a short film his friend is making. Coincidentally, Milou is also the maiden name of Beckett’s grandmother.

Described as rock/pop, Milou Sky’s musical style is a result of the eclectic influences of its individual members. As mentioned above, Beckett and Ninfo are into 60s classic rock. But Beckett also listened to rap, pop, and R&B to expand his musical knowledge. In fact, his interest in music started when he first heard an Eminem song.

Liam, who learned how to play the guitar at age 13, was introduced to music by his father. He was also influenced by classic rock but has also taken cues from 90s alternative and grunge bands. Nolan’s bass riffs, on the other hand, hint of Kings of Leon, U2, and XXXTENTACION.

The band’s debut single was released January 24th of 2020 and they plan on releasing more music this summer. To date, Compromise has almost two million streams on Soundcloud. The band also has more than 100,000 followers on Instagram.

Michael Peres is a serial entrepreneur and journalist best known for founding various tech and media startups. Peres has developed an interest in exploring the unique mindsets of life’s outliers: extraordinary people who have weaponized their perceived limitations and found a way to succeed. His passion is to share their stories, giving strength and inspiration to those who are trying to find their way in life. 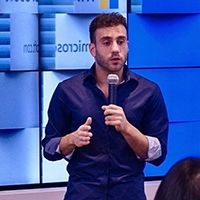 How Can Modern Tech Help You Learn an Instrument?

By Morris
Learning a new instrument can undoubtedly be a profoundly fulfilling experience, if not…
END_OF_DOCUMENT_TOKEN_TO_BE_REPLACED
0
0
Share
Entertainment