Trending
Victoria’s Secret 2019 Fashion Show Officially Canceled  TOKEN2049 is Back for 2020, Examining What’s Next for the Crypto Industry How to Boost Your Affiliate Commissions Overnight How iOS 13's dark mode can make your life easy How to Manually Install Skyrim Mods - Guide For Mods
Cryptocurrency

Victoria VR is a blockchain-powered project seeking to become the next big thing amid the Metaverse and VR revolutions.

Powered by technologies like Unreal Engine, cryptocurrency, and NFTs, Victoria VR is focused on the development of a self-sustainable virtual world that doesn’t depend on its original creators to continue to grow.

This, in addition to the degree of creative freedom that users will possess, is the deciding factor setting the projects apart from the competition.

“Our vision is to allow our users to bring to life their craziest ideas and their most secret wishes,” reads the project’s whitepaper, “We want our citizens to be able to experience their greatest life desires, with unlimited possibilities for working, creating, discovering, and trading.”

This vision is supported by the team assembled to develop Victoria VR, which includes veterans in the world of gaming, software development, blockchain, and of course, VR.

Founders Adam Bém and Ondřej Dobruský not only have plenty of experience in the world of software development and cybersecurity but also have years of experience holding leadership positions over the past decade.

Now, they are working with a team composed of some of the top talents in their respective fields, including names like Mario Valle Reyes, Adam Slezak, Jan Herman, Mark Akinwale, and Loic Claveau.

Victoria VR: An Immersive World Where Anything is Possible

By bringing the best of virtual worlds from the past like Second Life and Minecraft into a virtual world focused not only on entertainment but also practicality. Victoria VR is all about creating solutions.

This is a concept that has separated the concept of the Metaverse from virtual worlds like the aforementioned, as well as other titles like Final Fantasy XIV, World of Warcraft, and many more. 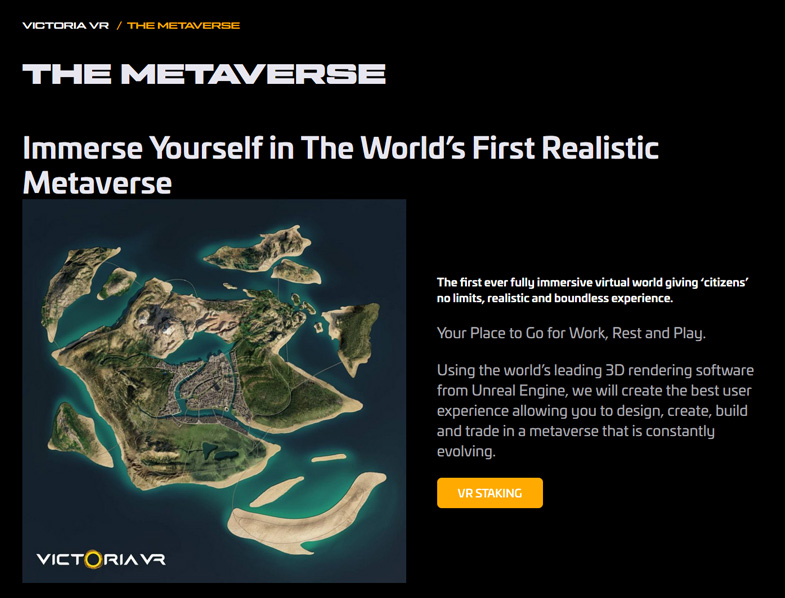 Victoria VR not only recognizes the value of these massive virtual worlds but also learns from their success stories, merging them with VR, blockchain, and more.

Ever since Ivan Sutherland and Bob Sproull created the first VR headset back in 1968, new iterations and approaches have emerged. However, it wouldn’t be until around 2012 that the Kickstarter campaign for the Oculus Rift would bring VR to the mainstream.

Suddenly, everyone was talking about how VR technology like that of popular works like Ready Player One, Snow Crash, Sword Art Online, and even The Matrix was just years away.

For years, VR stayed relatively present in popular culture but it was also relegated to the role of a novelty. Now, talks about the Metaverse and the reduction of VR equipment resulting from more competition in the space has allowed VR to emerge once again.

The VR Market is estimated to be worth 12 billion dollars as of 2022 and is only expected to continue to grow with projects like Victoria VR leading the charge.

With gaming-related software and hardware like Unreal Engine, graphic cards, operating systems, code libraries, and more, VR is now more accessible than ever.

Victoria VR is a project looking to bring all these technologies together to create a new means for everyone to immerse themselves in a one-of-a-kind experience in the Metaverse.

A Four-Pronged Approach to the Metaverse

With Victoria’s VR approach to the metaverse being all about merging the entertaining and the practical, the team came up with 4 areas they want their Metaverse to be applicable to: Education, Productivity, Economy, and Entertainment.

Victoria VR is a project that learns heavily from the success of virtual worlds designed for gaming and entertainment.

As such, citizens of its metaverse will be able to engage in gaming, exploration, and relaxation. However, activities like shopping, sporting events, and concerts will also be available, adding value to the entertainment aspect of the projects.

This means brands and organizations can make use of Victoria VR to allow their teams to collaborate more effectively, something that has become a priority in the post-COVID world.

Loads of Real-World Use Cases

With the proliferation of remote work and virtual offices, promises to be a game changer for employers and employees alike.

Just like work, education is another area that has changed dramatically over the last few years.

This is why Victoria VR has also chosen to include tools and solutions that allow schools and universities to make use of the Metaverse to conduct classes, training courses, and any other activity they require.

With the additional opportunities that a virtual world brings to the table, this would allow students to enjoy experiences that would be unavailable otherwise-

Finally, we have one of the most important aspects of Victoria VR: the economy. The project uses cryptocurrency, distributed ledger technology (blockchain), and NFTs to create an open economy in which users truly own their assets and their value.

This is possible due to the existence of marketplaces and the creation of a new business model that will be self-sustainable without the need for a third party. The ecosystem is entirely dependent on users, which means the interests of no for-profit businesses will affect Victoria’s VR Metaverse.

Bringing Financial Opportunities to the Metaverse

The Metaverse promises to be one of the greatest innovations of our generation. With financial experts like Citi considering it will become a multi-trillion-dollar industry, it is easy to see why every tech titan wants to be part of it.

However, for-profit companies have proven unable to gain their user’s trust when it comes to privacy, their user’s financial interests, or other areas of concern.

Victoria VR’s objective, on the other hand, relies exclusively on the interests of its users.

As the project seeks to become self-sustainable, it has placed multiple incentives that will ensure users not only remain engaged with the Metaverse but are also personally invested in its success.

Add the decentralization that blockchain and crypto bring to the table, and there is a recipe for a rich and complex economy that will benefit all users, no matter their nature.

Victoria VR makes use of a unique currency known as VR Tokens, which will be used to interact with all the features and financial systems of its Metaverse. This currency will also be earned by users as rewards or from their interactions with other players.

Ever dreamed about working remotely from a foreign company or buying clothing online without having to risk that they don’t fit you? This currency will allow transactions like that.

Of course, as Victoria VR also has a lot of gaming built inside it, users will be able to take advantage of the rise of the Play-To-Earn movement started by games like Axie Infinity. This further increases the number of financial opportunities that Victoria VR brings to the table.

In addition to all the activities that users are able to participate in and the assets they can obtain, Victoria VR also features virtual real estate which can be developed.

Virtual real estate assets bring another layer of reality and complexity to the Victoria VR ecosystem similar to that of household names like Decentraland and The Sandbox.

Finally, there is the governance model. Victoria VR operates as a Decentralized Autonomous Organization (DAO), a model that has become increasingly relevant in the blockchain space.

What this means for the users is that they are in front of the projects, helping decide how it grows and evolves.

Making an impact on project growth further adds to the role that users play when it comes to gaining value from their interaction with the Victoria VR universe, taking it to a level that no other Metaverses out of blockchain can achieve.

Victoria VR is a Metaverse project that shines due to its complexity, which is the result of its commitment to creating the definitive Metaverse.

Not only does the project offer decentralized elements like NFTs, Crypto, and blockchain, as well as traditional elements like fully immersive VR, MMORPG-like features, and freedom of choice.

However, Victoria VR is the only one to make use of technologies like Unreal Engine to achieve hyperrealistic graphics and SFX, algorithmization, and a complex self-sustainable economy.

By committing to creating an ultra-high quality Metaverse, Victoria VR is not only looking to be another player in the space but to be THE Metaverse.

$10 Million Raised for Onomy Protocol on Brink of Launch

By Matthew Velter
The world of traditional and decentralised finance continues to converge, with large financial…
END_OF_DOCUMENT_TOKEN_TO_BE_REPLACED
0
0
Share
Cryptocurrency

Binance Crypto Fund: To The Rescue But There Are Exceptions

By Matthew Velter
Every day, money is in and out of the crypto market. When things went smoothly, everything seemed…
END_OF_DOCUMENT_TOKEN_TO_BE_REPLACED
0
0
Share