Trending
How to Boost Your Affiliate Commissions Overnight How iOS 13's dark mode can make your life easy How to Manually Install Skyrim Mods - Guide For Mods Victoria’s Secret 2019 Fashion Show Officially Canceled  TOKEN2049 is Back for 2020, Examining What’s Next for the Crypto Industry
Cryptocurrency

Maincard is a blockchain project focused on offering Fantasy Sports enthusiasts a new way to interact with their favorite sports. By bringing cryptocurrencies and NFTs to the table, not only will Maincard users get to truly own the assets they acquire during their journey but also to further increase their profits.

Sports have been an important part of every major civilization for millennia. Team sports like Polo and Boxing have survived the passing of more than 2500 years. These sports and events not only have never failed to bring people together but they made their fan bases an integral part of them.

Technology has played an important role in world sports by allowing fans to interact with their favorite sports, teams, and players in new and exciting ways.

Let’s dig in to Maincard…

A Big Market for Maincard

Games like Fifa and Forza Motorsports put the player right in the middle of the action while trading cards allowing them to collect their favorite moments.

New technologies like VR, NFTs, and the Metaverse are also being constantly used in new ways, further expanding the capabilities of existing mediums.

Of all the ways players have to interact with their favorite sports, Fantasy Sports have become one of the most popular. 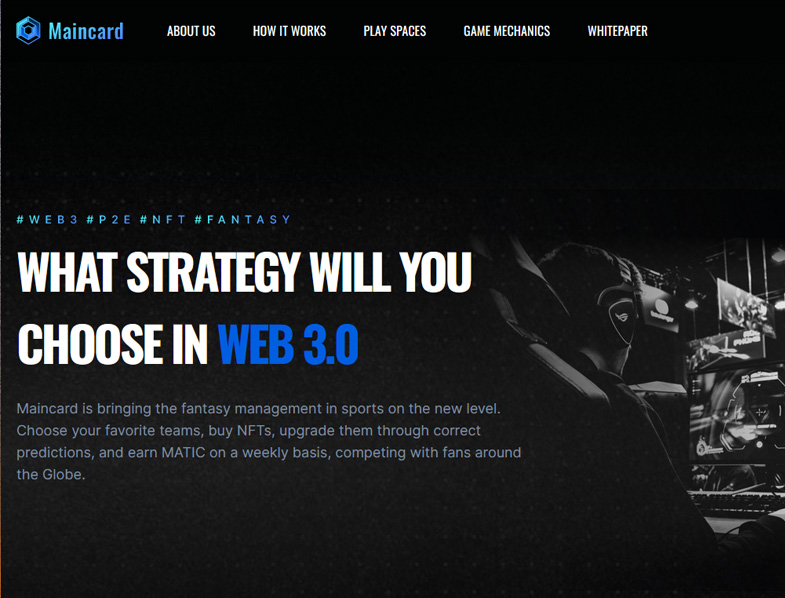 By allowing users to create and manage their dream teams, and using them to compete with each other in individual games or seasons, sports have found a new way to engage their fanbase.

Fantasy sports not only provide a great deal of interactivity but also strategy as they are based on live statistical performance.

With experts expecting the Fantasy Sports market to be worth over $26 billion by the end of 2022, it is not surprising that the demand for innovation in the niche is increasing.

While some Fantasy Sports platforms offer a means for their users to benefit monetarily, they have been problematic in many ways.

This has led to projects like Maincard making a move to revolutionize the industry by bringing blockchain, crypto, NFTs, and Web3 to the table. Let’s take a look at everything Maincard has to offer.

By making use of blockchain technology to decentralize its platform, Maincard is not limited to working in specific countries. This allows anyone with access to crypto and the internet to engage in Fantasy Sports, bringing the experience to those who have never had the chance to join before.

Maincard also seeks to be an educational resource for those interested in learning more about crypto, NFTs, and gambling. This is done by making use of unique gamified resources designed to make access to the Maincard experience not only accessible but also fun. 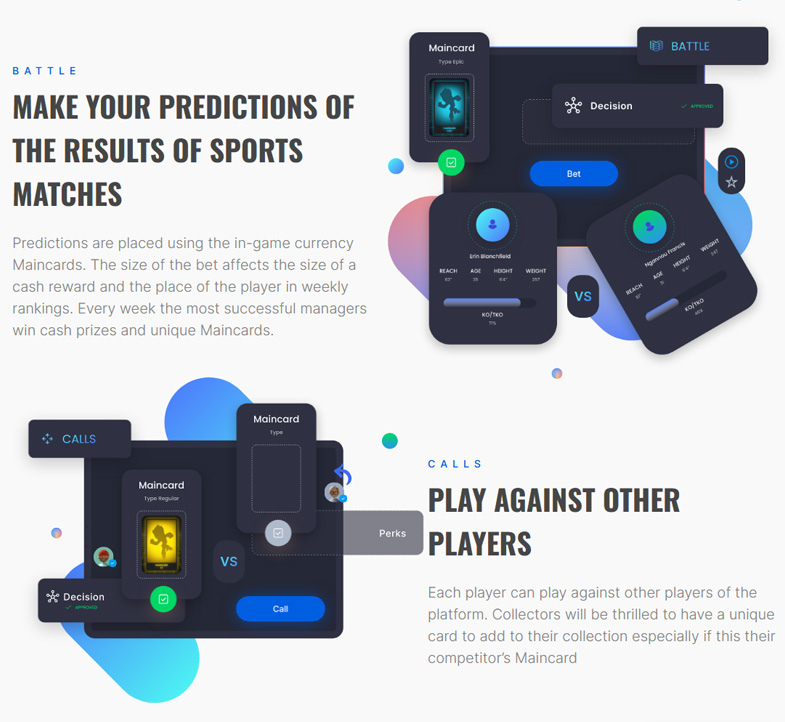 The premise of the project is simple: Register, connect your wallet, buy NFT cards (Maincards) to make bets on your favorite sport, and collect the earnings if you win! You can also compete with other players to earn additional Maincards and benefits, as well as start fundraising campaigns to visit your favorite sports event.

The team has already reached several important milestones that include full integration of Opensea into its platform, the building of infrastructure on Polygon, the development of a randomizer that ensures fairness in the minting of the 5 levels of NFTs, and being accepted for the HYPE Web3 acceleration program in Tel Aviv.

Contracts with top providers of sports content have also been signed, which will ensure that more than 1000 users already on the waitlist will have quality content to enjoy from the start.

What Features Does Maincard Offer?

At first glance, Maincard follows a model used by similar projects in the past: The minting of NFTs to represent sports cards that are then used by collectors, players, and investors.

However, Maincard seeks to be much more than just a collectible. As such, several features will be in place to allow maincards NFT holders to interact with them.

The main function of maincards will be betting on eSports and traditional sports. Just as with traditional betting, those who accurately predict results will receive earnings as a result.

However, Maincard has introduced a feature that will “damage” maincards used on a failed bet instead of taking the card away. These damaged cards can be later repaired as long as they have enough “lives”, which will depend on their level.

This feature is tied to the betting functionality offered by the platform. When players reach a win streak, they will have their maincards upgraded to allow them to generate higher earnings.

It means that not only will players be able to generate profits by successfully predicting results but by maintaining their win streaks, further incentivizing player activity and rewarding it. 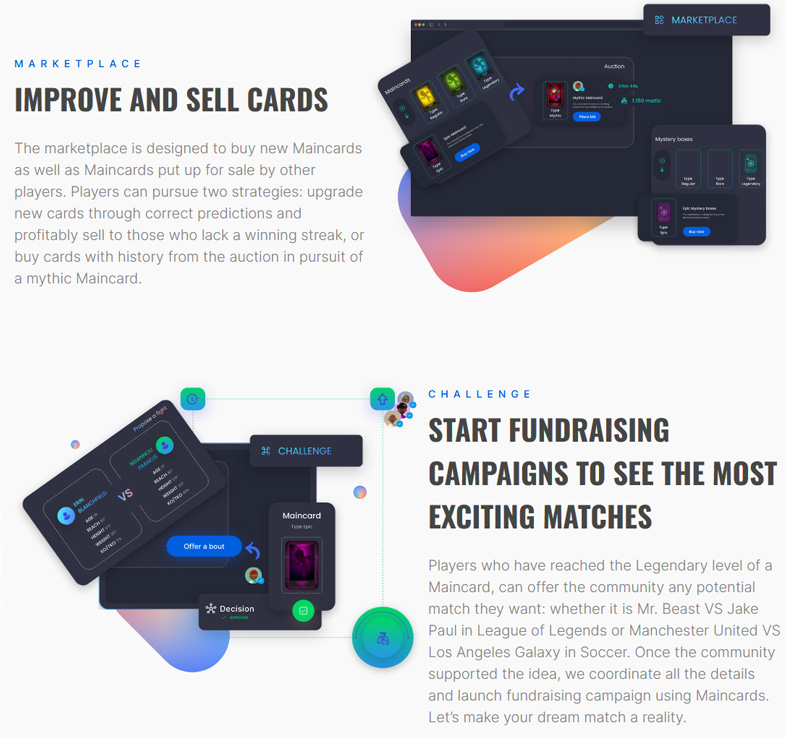 Players who wish to play against each other will also be able to do so with their maincards. This feature will work similarly to the standard betting but will differ in the fact that players will be able to gain each other’s cards. This makes the risks associated with the bet bigger, but the reward as well.

Maincard’s marketplace will allow players to trade their maincards in different ways, with upgraded cards being especially in demand. As players truly own their cards due to their NFT nature, this opens the doors for a completely different way of generating profit beyond betting.

Just like players in MMOs and traditional gaming, players will likely work toward upgrading their cards before selling or trading them, rewarding their expertise and time.

As a project based on traditional Fantasy Sports, Maincards will also have a weekly leaderboard to allow players to see how well they are performing. Every week, the top3 managers will be rewarded with rare NFTs and cash prizes, rewarding them for outperforming other players.

Probably the most innovative feature, fundraising campaigns will allow holders of 4th level maincards to create a campaign destined to visit their favorite sports event.

Other players will be able to donate NFTs, helping their fellow sports fans to make their dreams a reality. With players all over the world being able to join Maincard, this feature will open the doors to millions of fans to experience what local fans can easily do on a regular basis.

As anyone in the blockchain space knows, a project is only as strong as the team behind it. When it comes to the core team, Maincard has managed to get a lineup of some of the best talents in the space.

While the team has yet to disclose the names of the founders to the public, this information has been made available to investors, journalists, and a selected few.

Having said that, Maincard was founded by a group of tech developers with years of experience in the crypto space.

Not only are the founders familiars with the ins and outs of the industry but they are also hardcore sports fans since childhood, having engaged with all types of mediums to interact with their teams.

This not only means there is a passionate number of people behind the project but also that the integrity of the product won’t be compromised for monetary reasons.

On the other hand, the executive team includes serial entrepreneurs who have founded several successful startups with a combined Annual Recurring Revenue (ARR) of over $50 million. It also includes the heads of development of top-tier financial and big four institutions.

Maincard is an extremely interesting take on the popular Sports Fantasy management niche. Not only does it bring true ownership by using NFTs and crypto but it also offers innovative ways to generate a profit and interact with their fellow fans.

The introduction of the fundraising campaign feature is also a testament to the passion the development team has for sports, going way beyond the features anyone would expect. Maincard is all about interaction and passion.

Sure, earning and profits are an important part of the project but its efforts to educate and provide an interactive experience show a commitment to helping sports fans enjoy their hobby in new and meaningful ways.

So far, the Fantasy sports industry has been growing based on the efforts of third parties without bringing anything new to the table. Maincard is looking to change this reality by bringing new technologies and making fantasy sports enjoyable again.

By Matthew Velter
Binance has admitted not keeping customers’ funds and the platform’s separate, according to…
END_OF_DOCUMENT_TOKEN_TO_BE_REPLACED
0
0
Share
Cryptocurrency