Trending
How to Boost Your Affiliate Commissions Overnight How iOS 13's dark mode can make your life easy How to Manually Install Skyrim Mods - Guide For Mods Victoria’s Secret 2019 Fashion Show Officially Canceled  TOKEN2049 is Back for 2020, Examining What’s Next for the Crypto Industry
Corona VirusGeneral News

Italy that was the epicenter of Europe’s epidemic, before Spain passed it in terms of the number of cases, noted its lowest daily COVID-19. In Spain, the increase in fatalities on Sunday 674 new deaths, less than 809 reported on Saturday. It was half the rate said a week ago.

According to data from the weekend;

In Europe, there are temporary hopes the Coronavirus can decrease, as new infections and deaths begin to drop.

Figures are forcing European leaders to think for plans to national lockdown exit. They are also pushing the community to keep discipline while the apparent recovery from the outburst is at an early stage.

According to the Civil Protection Agency;

There was an increase of 525 fatalities a day before, the little increase daily since March 19. On Saturday, there were 681 fatalities, and the day before, 766 deaths increase.

In Italy, there are 128,948 cases and 15,887 deaths to date. It is the highest death rate in Europe. Rome imposed some of the toughest sanctions in the world by implementing a national lockdown on March 12. But now there were clues on Sunday that the upcoming days can start to find its way to ease of action and strategize lockdown exit.

“The curve has started its descent, and the number of deaths has started to drop,” Italy’s ISS national health institute Director Silvio Brusaferro told reporters. 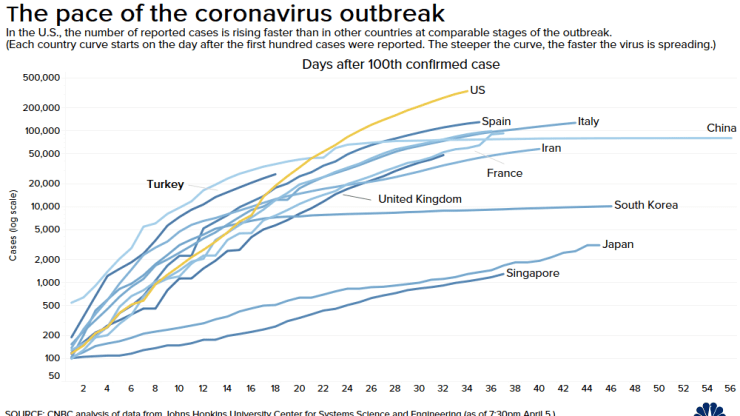 “The curve has begun, and the number of casualties has started to decline.”

Spain that has highest infections report than Italy, the new cases and deaths start to decrease this weekend: The death toll Sunday’s increase 674 new demises, drop from 809 reported on Saturday. It was half the rate testified a week ago.

In the middle of Monday morning, Spain recorded 637 casualties in the past 24 hours, a descending tendency. Both France and Germany also recorded a decrease in the daily death rate.

France has recorded a total number of deaths of 8,093, and now it is also in the downfall of the daily deaths and new cases record.

Moreover, Germany also recorded a downfall in the death rate in the last 24 hours.

However, bodies like the RKI are careful about predicting how Germany’s epidemic will develop, telling CNBC that Germany is still at the start of its widespread. 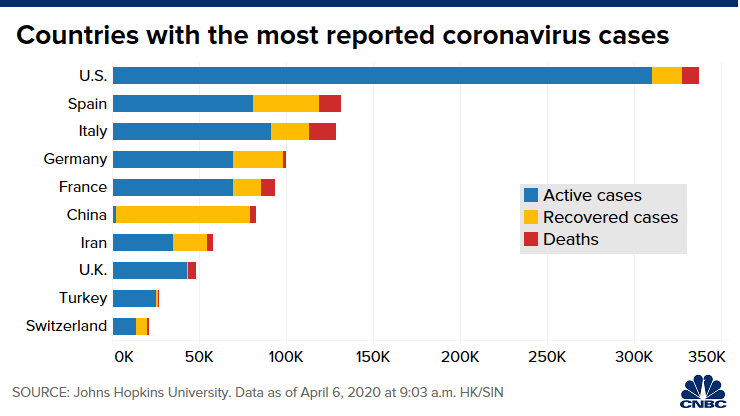 Temporarily the figures were hopeful.

But he also appealed to the German people to keep social distance and sanitation steps.

The German administration is now seeking to get two points; How to protect health for all and also beginning a procedure to come to routine public step by step.

Germany, Italy, and Spain have all extended lockdown measures to April 19, April 12, and April 25, respectively. The U.K. said it would review its lockdown after April 12 (when it’s estimated the virus could peak in the country).

In Germany, Italy, and Spain, all lockdown measures are April 19, April 12, and April 25. According to the United States;

They will assess its lockdown after April 12.

Stockholders are also confident that European markets will increase Monday quickly as they responded to the downfall in the record of new coronavirus contagions in the state.

“We think the information is still approximately reliable with our prevailing situation in which new record hit the highest rate in Europe by early April and in the U.S. by mid-April. It is despite the severe limitations to control the feast lifted by mid-May.”

By Morris
Zomfi, an NFT game where players can collect $Zomfi token, has finished their $2.6m seed and private…
END_OF_DOCUMENT_TOKEN_TO_BE_REPLACED
0
0
Share
BusinessGeneral News

By Morris
A financial advisor is someone who provides financial guidance and advice to clients. This…
END_OF_DOCUMENT_TOKEN_TO_BE_REPLACED
0
0
Share
General News

By Morris
The team at NFTY Portal has worked endlessly to ensure a smooth user experience. NFTY Portal, a new…
END_OF_DOCUMENT_TOKEN_TO_BE_REPLACED
0
4
Share